The Summit of Sustainability

A superlative event and media magnet: The G7 Summit at Schloss Elmau in Bavaria. The construction of the infrastructure for over 2,500 accredited journalists from all over the world was entrusted to Losberger de Boer, one of the world's largest suppliers of temporary and permanent space solutions. This was the 4th G7 summit the event building specialist was contracted for.

Feel free to reach out to us for more information on renting one of our event solutions.

Feel free to reach out to us for more information on renting one of our event solutions.

The Summit of Sustainability

At the end of June, the G7 Summit was held for the second time in Schloss Elmau, Bavaria. "Progress for a fair world" was this year's motto, and this topic was discussed by the leaders of the largest democratic industrial nations worldwide. They met at the foot of the impressive Wetterstein Mountains.

Sustainability as a guideline

Losberger De Boer built the infrastructure to accommodate the international media, in compliance with planning specifications of the general contractor for the G7, POOLgroup. The facilities were spread out over two locations: The International Media Center (IMC), a huge media landscape, was created in Garmisch-Partenkirchen, and the Briefing Center was built close to Schloss Elmau.

"The federal government's objective was to design the summit as a prime example of sustainability," says Detlef Schmitz, Losberger De Boer’s managing director and project manager. "Many of the structures, materials and equipment used, e.g. for the ambience-appropriate decoration, were rental material. In general, care was taken to ensure that most of the materials and elements used could be recycled or reused, such as 2,000 square meters of carpet tiles. Where possible, existing buildings were incorporated into the design to reduce the number of temporary structures - the Edelweiss Lodge, for example, served as a catering location for the journalists. A sophisticated waste management concept for the conference venues and outdoor areas was used to combine cleanliness and sustainability."

Sustainable thinking also determined the way energy supply and air conditioning were handled. For example, the IMC was connected to the power grid of the Garmisch-Partenkirchen municipal utility, which generates its electricity from hydropower. The main lighting via Erco rails and the emergency lighting were implemented on a power-saving LED basis. In the unlikely event of a power loss, BioDiesel-fueled gensets were on standby. Heating and air conditioning units were also exclusively powered with renewable electricity (or biodiesel, if necessary).

The location in the mountain range, 10 km beyond the reach of the railway network, provided an additional challenge for the construction of the International Media Centre (IMC), the heart of the summit. Temporary structures were erected on the Hausbergplatz in Garmisch-Partenkirchen, covering 6,500 square meters. They served as workspace for the international media, and also housed the medical facilities and security functions. With all the tents and overlap, an area of 7,100 square meters was packed with facilities.

The elevation difference on site also played a big part, as height differences of more than 10 meters - up to five meters for each building - were common. The height compensation for the three temporary buildings of the press center was achieved in a cooperation between the companies Losberger de Boer and Nüssli. Nüssli supplied the technology for the height compensation by the use of scaffolds, which were able to absorb both the occurring forces and the ground load. The statically necessary ballasting was carried out by concrete weights within the scaffolding. The scaffold and the temporary structure were connected in such a way that the two components could be accepted by the TÜV as a static unit. 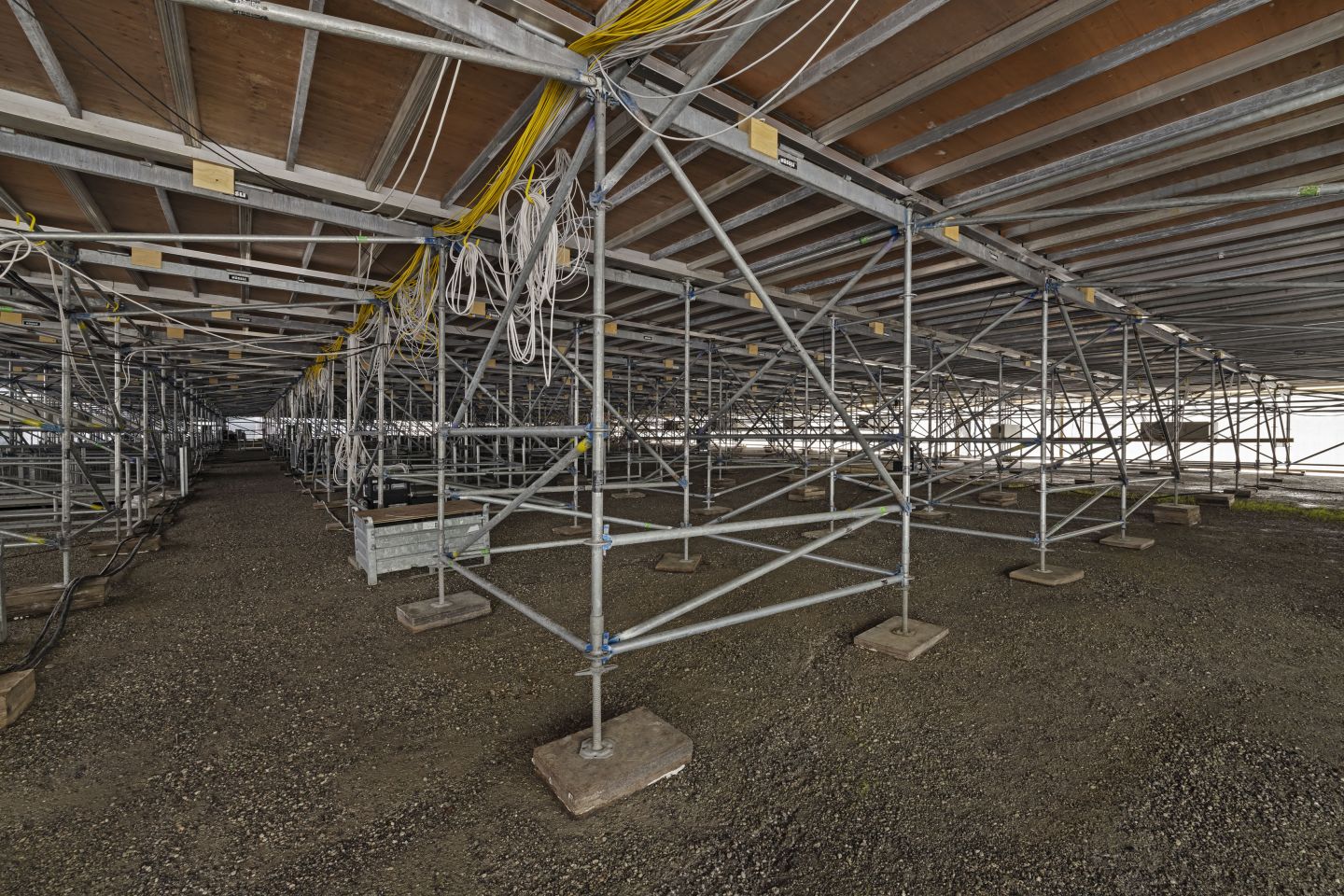 The design of the briefing center showcased how stunningly beautiful temporary buildings can be. Several hundred journalists, who were brought by shuttle from the IMC to Schloss Elmau for individual press appointments, were greeted by a double-story building with a cantilevered roof and a special Bauhaus-style facade. An inviting 10 x 10 meter terrace podium for outdoor catering, meetings, and breaks was added to the structure. A special roof extension raised the total height to over 14 meters. Two interior staircases connected the floors, while two external staircases served as emergency exits. A handicapped-accessible elevator was installed for maximum mobility. On two floors, on a total of 2,250 square meters, 28 individual rooms, four briefing rooms (with capacity ranging from 30 to 130 people), a large work area with 80 workstations, a central medical room and a spacious reception area with information counter and wardrobe were created. For sustainability reasons, system components and various special components from the 2015 G7 Summit were re-used here. Technical, service and catering rooms as well as premium sanitation completed the facilities for media representatives.

A wide range of innovative techniques were used to create a safe and comfortable indoor climate. The installation of sufficient electrical ventilation panels ensured corona-compliant ventilation, while modern cooling and heating systems ensured an comfortable temperature. Wired fire alarm, smoke detection and home alarm systems watched over the entire interior. A special feature was added in the form of smoke extraction panels that were connected to the fire alarm system, which open in the event of a fire alarm but can also be switched individually for ventilation. Since there are often violent thunderstorms in the mountains, a lightning protection system was installed as well.

Feel free to reach out to us for more information on owning or renting one of our structures.